The 1st XI play their home games on Sevenoaks Vine

Sevenoaks Vine 1st XI is one of only two clubs to have played in every Kent Premier League season since its inception in 2002. After a disappointing campaign in 2013, the team is looking to mount a serious challenge for the 2014 title. A young but ambitious squad is looking to compete with the best sides and players in Kent and hopefully bring the title back to Sevenoaks! 2014 is a big year for the club, and one we’re very much looking forward to. We intend to enjoy ourselves on and off the field hopefully celebrating some successes along the way!

We’re delighted to welcome Nick Sale to the club as our overseas player. Nick comes highly recommended by many people both in the UK and Australia and has ambition to make it in the professional game. This is something we can hopefully help him to achieve over the next 6 months and, of course, he has big boots to fill as our last Aussie, Steve Smith, has gone on to wear the Baggy Green. It’s also great to see Fabian Cowdrey back in a Sevenoaks Vine shirt- though for his sake hopefully we won’t see him too much as he will have other commitments with Kent.

Training will be an integral part of our preparations for the season and throughout it will continue. You won’t win a title if you’re not training so we will make sure as a squad that we will be practising at least once a week. Head coach Richard Parsons will be overseeing a lot of our training sessions. He will also be on the selection panel along so it’s vital that players are impressing him whilst practising.

It’s also great to welcome two players into the leadership group as vice-captains, Luke Blackaby and Oliver Durell. Luke has captained teams at first class level and Oliver is an excellent motivator so hopefully these skills will help us be extremely successful on and off the pitch.

We will also be taking the T20 competition very seriously this season and feel we can achieve big things in it.

Looking forward to a great season. See you at the Vine 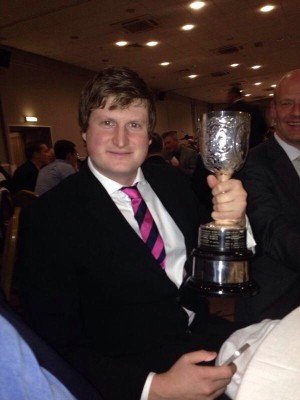 Tom Parsons was the League’s most effective wicket taker for the second year running in 2013.