On an overcast day at the Vine, Sevenoaks won the toss and elected to field.

Bexley got off to a good start with their openers getting them off to 45-0. The introduction of Luke Blackaby changed the game and in tandem with Miles Richardson they went through the top order very quickly, with Luke Blackaby taking an excellent 5 wickets. Olly Howick, Tom Parsons and Miles Richardson shared the rest of the wickets between them on a day when the bowlers were managing to swing the ball in bowler friendly conditions leaving Bexley on 109 all out.

In reply to Bexley’s 109, the Vine didn’t get off to the best of starts with Bowden and Sale falling early. Michael Barber- promoted to 3 after some good performances in the nets and Luke Blackaby steadied the ship putting on 70 for the 3rd wicket. However a mini collapse occurred when the spinners came on and the Vine were struggling at 80-7. However the calm head of Karl Pearson and the striking of Miles Richardson won the Vine the game to make it 2 from 2 for the Vineyard in the league this season. 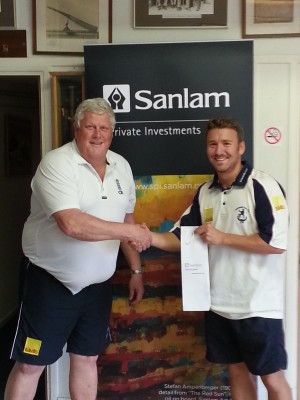 Luke Blackaby receiving the Sanlam Private Investments Man of the Match award from club coach, Rick Parsons, his stats being:-