Looking to build on the previous weeks win SVCC, on winning the toss, inserted Bickley Park on a green but seemingly good batting track. Tom Parsons continuing his good form got the breakthrough having Charlie MacLeod caught by skipper Karl Pearson at second slip for 13.  Bowling with pace and getting some movement off the pitch SVCC openers, Tom Parsons and Miles Richardson restricted the scoring rate but it was Karl Pearson coming on up the hill who took the next three wickets.

Five Bickley Park batsmen got good starts, with Messrs. Leale-Green,  Ridley,  Darroch and skipper Chris Coulson all getting into the thirties  but were unable to push on. Wickets continued to fall at regular intervals with Dan Magin scoring a quick 22 at better than a run a ball to lift Bickley to 216 for 8 at the close of their innings. Pearson with 4 for 36, Parsons 3 for 61 were the pick of the SVCC bowling attack.

SVCC, as in previous matches, started their innings strongly with Olly Durrell (55) and Luke Blackaby (39) striking the ball cleanly, and some big hitting from Durrell saw the Vine get off to a flying start before the pace from the overseas Daniel Magin got Bickley’s first breaktrough. From a promising position the top and middle order wickets fell regularly and when at 118 Blackaby fell to MacLeod catch off the bowling former Surrey spinner Nayan Doshi, SVCC were always chasing. The lower middle order and tail hung around with Miles Richardson (19), Tom Coldman (12) and James Day (12) all contributing but with Sanlam Private Investments Man of the Match Dan Magin returning figures of 5 for 55 from his 15 overs SVCC were bowled out 33 runs short of their target. 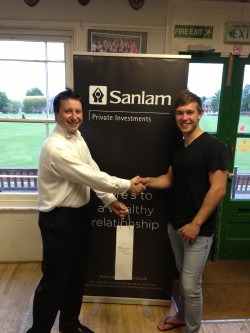