The Vine marched towards their first target of the season (6 wins) by collecting their 5th win of the season in another ruthless performance against Sandwich II on the Vine.

On a murky overcast day, skipper Harkin was disappointed to lose the toss and be put into bat, but his men responded in the manor he expected and began to post a competitive score. White and Harkin went cheaply, so it was left to opener Matt Boardman (51) and Julius Cowdrey (69) to lay the foundations for the Vine. Boardman batted with intelligence as Cowdrey continued his fine start to the season, destroying anything lose from the Sandwich attack. Some late blows by the tail, including a surprising 6 from veteran Goodworth, saw the Vine up to 181, a very competitive score.

Openers Ed Goodworth (2-41) and David Leach (3-46) immediately put the Vine in a good place taking out the top order. In particular Leach bowled wonderfully, beating the bat on numerous occasions, simply swinging the ball too much. Leach has the potential to become a serious top class bowler for the Vine and the club are excited about his potential. John Gethins (4-27) was introduced into the attack to destroy the middle order and finish the job off with a late wicket before the Vine went into celebration mode. 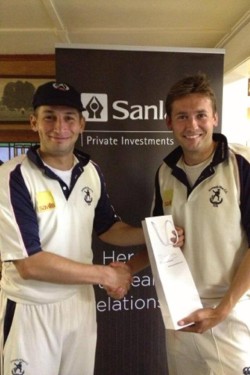 Sanlam Private Investments Man of the Match – John Gethins for his 4-27 to propel the 2nd XI to the top of the league.