The Vine won the toss and elected to bowl against newly promoted Tenterden and immediately Ed Goodworth and academy opening bowler Piers Robinson made inroads removing the opening opposition pair. Tevis Knight (64) and Mark Brann (46) were the only 2 batsmen who looked to get settled in on a slow Vine wicket, but skipper Harkin was happy to let them move the score forward at 2/3 runs an over as the Vine aimed to keep them under 150. Soon Julius Cowdrey (3-34) made the breakthrough removing Brann and then Tenterden crumbled as Goodworth (4-39), Crang (2-49) and Robinson (1-21) finished the job off in quick fashion. Tenterden scoring an under par 145 and the Vine seconds had putting in another successful bowling performance.

A steady start would be required to make sure there wasn’t a nervous second half of the game for the Vine and Alex Kirk Patrick (43) and academy opener James White (24) delivered that as the Vine moved to 56/0. White was bowled, Boardman (13) came and went and it was left to Cowdrey (42*) to get the Vine over the line as a couple of middle order wickets fell against the spin of Collins and Baker. It was an excellent 5 wicket win by a young Vine second eleven who are looking to drive hard their 2013 campaign in the first half of the season before they are joined by the University players in the middle of June/July. It is shaping up to be an exciting season yet again for the seconds.

Julius Cowdrey was the Sanlam Private Investments man of the match for his 42* and 3-34 off 15 overs! 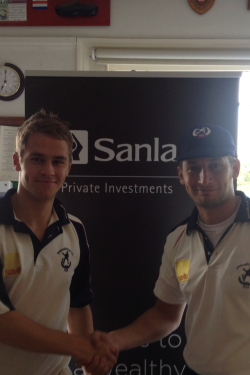