The evening of Friday 5th July saw the beginning of the Vine’s cricket week as the Old Oaks entertained the Knockers, before the 2nd XI defeated Bromley Common on the Saturday. This was followed up by the annual Summer Ball which fittingly saw all four Vine teams celebrate their victories.

The Sunday then saw the 1st XI host OD CUACO in the Quarter Finals of the Kent T20 Competition. The Vine booked their place in their first ever finals day with an 8 wicket victory.

The main week opened up with the welcoming of Lloyds of London, who defeated a young Vine XI by 70 runs. The Vine would also be defeated on Tuesday as they welcomed the AKCC.

As is tradition, Savills Day took place on Wednesday, and the crowd was treated to a dramatic encounter between the Vine and the MCC. The MCC would finish 338-4 from their 38 overs, and had the Vine in all sorts of trouble with the score at 90-7. However, a match saving innings by Luke Schlemmer, who finished 116*, along with handy resistance by Henry Procter and Andrew Reid Dick saw a draw that went to the final ball of the day. 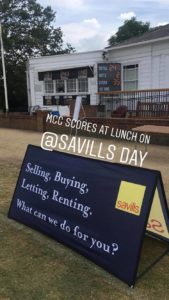 The Challenge the Legends Day, in aid of Chance to Shine, proved successful once again. Whilst the lunch and entertainment off the field was well received, a Legends XI comprised of the likes of Courtney Walsh, Devon Malcolm, Monty Panesar and Ryan Sidebottom to name a few, took on a Chance to Shine XI and won by 10 runs. 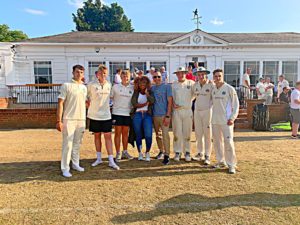 On Friday evening, the Old Oaks welcomed Otford, and won comfortably in front of a growing crowd who were enjoying both the sunset and Beer on the Vine.

The weekend consisted of two blockbuster events. The first being on Saturday as the 1stXI emerged victorious by 4 wickets against top of the league Bexley CC.

On the final Sunday saw the Vine hold its first ever Development T20 Tournament. The Development Teams of Sevenoaks Vine, Lordswood and Bidborough competed for the Manak Solicitors T20 Tri Series, with Lordswood winning the trophy having beaten both the Vine and Bidborough with ease. The tournament also welcomed the visit of Cryojuvenate who helped to treat both injured and sore players. The Vine would go on to beat Bidborough in the final game of the day, just in time for the conclusion of the World Cup final, in what was a fitting way to cap of a successful week for the club both on and off the field. 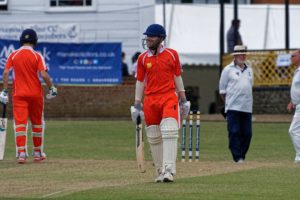