The current earliest known reporting of cricket in Sevenoaks is based one report in the London Evening Post of a match between the Gentlemen of Kent and Sussex, which took place on 6th September 1734.  On that occasion it was Lord John Philip Sackville who pitted his team and his purse against the Gentlemen of Sussex.  The Sackvilles of Knole were among the many aristocracy of the day who matched their XIs against neighbouring estates for high stakes, which could be as much as 1,000 guineas!  In 1773, John Frederick Sackville, the 3rd Duke of Dorset and a great patron of the game, presented the Vine Ground out of the Knole Estate to the town of Sevenoaks to be a cricket ground forever.

The Pavilion, itself a listed building, was built in 1850 and extended in 1975 when the Club merged with Sevenoaks Hockey Club.  The bandstand was built in 1894.  The Club Score box was refurbished in 1993 following donations from members and friends in memory of Alan Housden, affectionately remembered as a cricketer and Chairman of the Club and again in late 2008, when an electronic scoreboard was added due to the kind bequests from three late stalwarts of the club, Ken Smart, Norman Golds and Steve Trounce.

The Club is the proud owner of many interesting items of cricketana, including a bat dating from 1745 made by the Pett Family of Sevenoaks, the first known bat maker.  The Club is also the proud possessor of many fine prints, a number of which hang in the Pavilion.

During the 18th Century great England players of the time included Lumpy Stevens, Joseph Miller, William Bowe and John Minshull, who were all employed on the Knole Estate.  All were feared by the famous Hambledon Club.  In fact it was reputed that the accuracy of Lumpy Stevens led to the introduction of the third stump on 18th June 1777 on The Vine.  The old notch stick was eventually replaced by score cards, the first of these being printed by Pratt, scorer to Sevenoaks Vine Cricket Club.

Since those early days the Club has seen five recent members, Chris Tavaré, Paul Downton, Mark Benson, Ed Smith and Alex Loudon play for England and one, Steve Smith, play for Australia.  In addition former players David Fulton and Ed Smith have both been in the Kent county side, with David as Captain in 2004, whilst Ed was made the captain of Middlesex in 2008.  A number of other players have held contracts with various counties including Will House, John Bowden, Tom Parsons, Maurice Holmes and Fabian Cowdrey, making a unique third generation at Kent CCC.

In 1975 the Cricket Club joined with The Sevenoaks Hockey Club to form the Sevenoaks Vine Club and in 1982 a second ground was acquired at Orchard Field, Otford, to replace the much loved and much missed Knockholt ground.  Substantial fund raising over many years finally culminated in the erection of the Otford Pavilion.  In 1994 the Cricket Club assumed full responsibility for the costs of maintaining the Vine ground and in 2000 also took over the Otford ground as all hockey moved to Astroturf.

Strangely, the actual name of The Vine is a mystery, but possibly relates to the existence of a vineyard near the Ground in the 14th Century when the Knole estates were owned by the Archbishop of Canterbury. 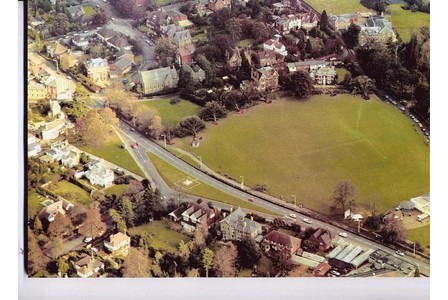 The hurricane on the night of 16th October 1987 will long be remembered in Sevenoaks for changing the whole character of the ground, as six of the famous seven oak trees planted for King Edward VII’s coronation in 1902 came crashing down in the fiercest winds seen in the south-east region for 250 years.  Subsequently, on the 6th December 1987 seven sapling oaks were planted – resulting in eight oaks lining the northern (lower) end of the Vine.