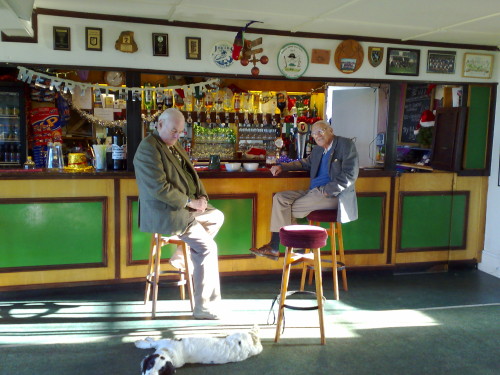 Nigel Durdant-Hollamby was a Vice President of SVCC and father of two Championship winning SVCC cricketers, seen on the left in this photo he was an ardent supporter of both the cricket and hockey clubs until Sunday 17th March 2013 when he passed away at the age of 90.

He will latterly be remembered as an ever-present supporter at the clubhouse on warm and sunny Saturdays supporting whichever side was playing at home and sharing a glass with his friend Adrian Greenwood (also in the picture).  His dedication to the club led him to name his house “The Outfield” in Chartway, next to the ground, and which fielded many stray balls from games at the top end of the square.

He was a great fundraiser for both clubs helping to raise funds to build the pavilion at Otford and insisting that the Vine had a flagpole and a club flag, for which we are indebted.