Fun in the sun for the Sevenoaks teams. Match reports from 2/6/2018

The Vine first team welcomed Tenterden Cricket Club and on winning the toss put Tenterden into bat on what looked to be a helpful wicket for seam bowling. Tenterden were soon in trouble at 47-3 as Tom Parsons removed their top order in quick succession, taking the wickets of Mosca and Crawford both caught behind by White, and Vernon for 14. All of the bowlers performed well in swinging conditions; Loughbough MCCU bowler James Carslaw took a brace of wickets, trapping Drewe LBW for 10 before bowling Mangold for a second ball duck. A fine spell from the evergreen Evert Bekker soon finished off the Tenterden innings. Bekker ended up with 4 wickets, taking the important wicket of Price (once again caught behind by White) who showed resistance, hitting 31 in a Tenterden innings that failed to get going. Bekker would then clean up the Tenterden tail, to finish with fine figures of 4-30 off his eight overs.  Despite the negative of bowling 29 wides in their innings, a lot of confidence could be taken from the Vine’s bowling performance, removing a well-established and strong Tenterden batting line up.

Facing small totals can often be difficult. However, Bowden set about continuing his fine form with a dashing 47 from just 35 balls, including eight fours and a six. The return of Kent professional Zak Crawley to their ranks boosted the Vine’s illustrious batting line-up that had failed to get going last weekend. Crawley posted a classy 47 before being caught. Despite losing the wickets of Bekker and Barber cheaply, Luke Schlemmer hit a patient 20 not out, accompanied by Max Aitken to see the Vine surpass Tenterden’s total in just 23.4 overs, and thus, securing a crucial second league victory by 6 wickets and pocketing a maximum 18 points. Another fine performance from the 1st XI, who travel to newly promoted Bromley Common CC who are still yet to achieve their first win of the campaign back in the top flight.

On a hot, humid day with a very green wicket, the Vine were put in to bat first. Looking to follow on from high scores last week, Adams and Quinney opened the batting. With the Tenterden openers bowling good areas, Vine were pressured in the opening overs and this wasn’t helped when Adams unluckily middled one straight to gully who took an impressive catch. In came Cowdrey at three, who played some very cultured shots, including an audacious reverse sweep, to get to 43. Attempting the reverse sweep again, he fell to a questionable LBW decision from the umpire. Houillon came and, like Cowdrey, played some impressive shots taking him to 20, before a tidy piece of fielding and a direct hit saw him run out. An unlucky day with the bat for the Vine continued as a short ball kept low to White, who could only deflect the ball onto his own stumps, was followed by two cases of picking out the fielder on the boundary from Anderson and Procter. A spirited contribution from the tail, notably Gavin (10) saw the Vine bowled out for 146

With a relatively small total to defend, the Vine came out of the blocks quickly, with Christie and Procter hitting good areas, heaping pressure on the batsman. This pressure paid off when a short ball from Procter was top edged and brilliantly caught by Reid Dick at third man, who initially looked to have misjudged it before reaching back and taking an outrageous one handed catch. Procter would strike again, getting his next victim out bowled leaving his figures at 2-23. Into the attack came the spinners, Cowdrey and Reid Dick. Cowdrey started very intensely, having several lbw appeals harshly turned down by the umpire. He eventually got his reward bowling the batsman with a tidy top spinner.

At the other end, Reid Dick was turning it sideways and was rewarded after a batsman played at one finding the outside edge and was caught by Adams at slip. Tenterden were still chipping away at the total however with the aid of a few wides. In need of wickets, the openers were brought back into the attack. Christie was able to pick up a wicket after the outside edge was found, but the remaining batsmen remained resilient. Cowdrey was able to pick up another wicket, before White was given the ball with the unenviable task of bowling the final overs. With 43 overs gone Tenterden scored the winning run taking them to a total of 147-7. A disappointing result, but positives can definitely be taken in a valiant effort to defend the low total. After two losses on the bounce, the 2nd XI host Whitstable next week in the hope their fortunes turn around to get their season back on track.

Another glorious day at the Orchard saw the Vine’s 3s welcome Old Warden CC from the Bedfordshire Invitation League who were on tour as there was a gap in the 3s fixture list. Captain Mike Martin organised the match with the view of raising a few quid for the Edenbridge CC Matt Cox pavilion fund where a number of the Vine’s new players have come from. But a few quid turned into several hundred. In fact £764 through catering, fines and a raffle. A massive thanks has to go to Catherine Proctor who managed to get the top prize of a nights stay at Hever Hotel for the raffle and donated cakes as did Mrs Tudor (they all disappeared!).

On to the cricket. The captains agreed to forfeit the toss and the Old Wardens batted first racking up 243 in their allotted 40 overs, some lusty blows by the ageing and satirical Seymour (55) eventually caught by an amazing juggling act by O’Brien as he ran in off the boundary at long off ending up rolling onto the outfield to complete the catch of the day.

Colt and Kent performance squad player Robin Docherty bowled his 8 overs well taking 1 -45 and another run out of his bowling, Rory Easton picked up a couple with his medium fast bowling extracting a bit of bounce out of the deck 2 -20 and Dan Martin picked up a couple as well 2 – 59 but much to the captain’s chagrin, it could have been much better as he refused to push his mid wicket back on to the boundary as the tempo was raised during the final overs and saw deliveries sail straight to where the fielder should have been!

A top tea was polished off by the players and the second innings got under way requiring 6 an over to stay in touch with the run rate. Rory Easton and Dan Martin opened for the Vine both playing their debut matches for the 3s and boy did they bat well ! Rory initially grasping the nettle with his wristy shots square of the wicket and Dan rotating the strike pushing Rory to run hard and picking up runs. As Rory began to slow Dan picked up the pace driving hard down the ground and punishing the short deliveries through the covers. Rory would pick up his pace again also driving the ball hard into the covers with his massive stride getting him over the ball. Rory reached his fifty first, with drinks at 20 overs the score was 118 just about right, the boys suitably refreshed pressed on and Dan reached his fifty but failed to acknowledge the applause as both Dan and Rory were deep in debate over whether there were more quick runs to be taken.

With the score on 174 Dan Martin finally fell with 64 to his name and Rory on 99 he duly completed his century then also fell for 101. Old Warden’s bowlers perked up sniffing a chance and boy did they get one as the middle order attempted to keep up with the run rate; batting was difficult on the slow surface and apart from Wilson who hit a quick 16 it came down to the finishers Hugo Tudor and Steve Bezuidenhout. What followed was a brilliant end to the game as they both scampered quick singles defying the ravages of Old Father Time it came down to the last ball 4 to win…… Tudor facing could only hit the ball to long on and only a couple of runs scored the Vine fell one short of what would have been a great run chase, but still a great game played in the true spirit of cricket.

A massive thanks goes to the Old Warden boys who donated their match fees and tour fines to the cause and also the the Vine’s 1’s who also dug deep and had a whip round to contribute. If you feel inclined to donate yourself please visit the Matt Cox Just Giving site and see how the campaign for Edenbridge’s new pavilion is going (https://www.justgiving.com/fundraising/mattcox-1). Next week, we return to league action against Old Williamsonians, again at Orchard Field. 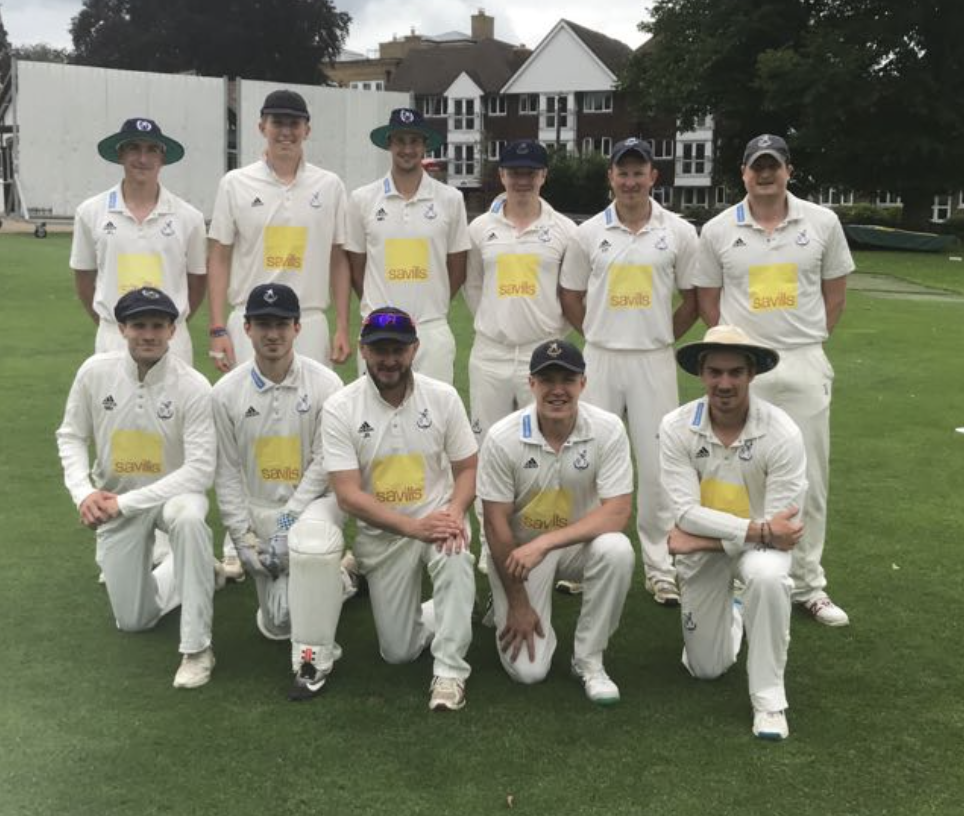