The visitors won the toss and elected to bat but would quickly fall to 41-3 as Chris Vernon (2-50) would remove openers Chris Williams and Viraj Bhatia, and Karl Pearson trapping number three Sam Stickler LBW. Julian O’Riordan (38) and Alex Willaims (70) recovered well, before Pearson returned for his second spell to bowl O’Riordan. Some loose Vine bowling would give the visitors a sniff of a high score, however, Henry Smith (1-23), Thomas Harvey (3-36) and Karl Pearson (3-31) would hold the visitors to 227 all out from 45 overs.

The Vine’s chase began in the worst possible fashion as Chris Vernon was bowled by Matt Barker for a golden duck in the first over. Harry Houillon and Ant Shales would take the Vine up past 50, before Shales was bowled by Dave Smith for 14. Cyrus White would then be bowled by the ball of the day for just 1.The Vine were now 70-3. Enter Thomas Harvey, who off the back of 97 against Linden Park, looked in fine form. Along with Harry Houillon, the pair put on a hundred between them, rotating the strike nicely, whilst also punishing the bad balls. Harvey would be run out for a well made 46. With 70 needed from the last ten overs, the run chase would become the Harry Houillon show. The young batsman took the game by the scruff of the neck, bringing up his maiden 1st XI hundred for the club. Houillon’s power hitting meant the Vine would need 27 from the last 3 overs. A couple of big hits later, 12 would be required from the last over. 6 runs would be hit from the first two balls by Houillon, followed by two dot balls. Much to the Vine’s forture, the fifth ball of the over went for four byes leaving two to win off the final ball. Fittingly, it would be Houillon to hit the winning runs as he clipped the ball into the leg side for two, sealing a famous win for the 1st XI.

In the final weekend of fixtures, the 1st XI face Holmesdale next weekend.

The Vine 3rd XI’s final game of the season was against Hunton Wanderers at the Vine. Hunton won the toss and elected to bat. Their openers came out all guns blazing with Daniels particularly free hitting in a quick fire 33 before Steve Bezuidenhout took a fine high catch off Ryan Gavin. Whilst the runs were flowing, wickets were falling regularly and after 14 overs Hunton were 115-6 with Peter Thresher having picked up three and Ryan Gavin two. Their seventh wicket pair then consolidated and added over 70 but after Chris Bryant (1-8) and Hugo Tudor (3-21) entered the attack the innings slightly fell away and Hunton were all out for 207.

Josh Haworth and James Thresher opened the batting for the Vine 3rd XI and put on 70 before Thresher was caught on the boundary for a well made 34. This heralded a collapse to 105-6 with Arj Sharma missing out for a change, Haworth being bowled for 23 , Steve Bezuidenhout run out in a mix up and Carl Nightingale skying one trying to up the run rate. Tudor and Bryant then added nearly 50 keeping the Vine hopes alive but as the required run rate rose to 9 an over the pressure told and the last 4 wickets fell in the space of 3 overs with the Vine all out 157.

The Vine won the toss and chose to bat at Bromley Town. Runs came quickly and were plentiful. Ryan Gavin opened the batting after a season long campaign to bat higher up the order, played a couple of nice shots through the covers and then nicked off. Cyrus White (76) and Milo Denny (60) then put on 136 for the 2nd wicket making their two decent spinners look rather ordinary. Strong knocks followed from Leo Bezuidenhout (34), Zac Schaeffer (33) and then a rapid 16 ball 50 for Charlie Williams off some rather generous bowling saw us to 318 for 6 off our 40 overs, which was always likely to be more than enough.

Will Gough Cooper opened up bowled his five overs very nicely with no luck, leaving all-rounder Hugh Piper at the other end to get 2 early wickets with accurate spin bowing. Wickets fell regularly for not many runs, including two hattrick balls, and were shared between Hugh Piper (2 for 8 off 5) , Cyrus White, Leo Bezuidenhout, Ryan Gavin and Ben Harvey( 3 for 8 off 6). Andrew Reid Dick (2 for 14 off 3.1) came on at the end to clean up the tail which had started to hit out with some good effect. Bromley ended up 96 all out.

The fixture concluded a good season for the Development Team in 40 over cricket, who played seven games, won three and lost four. 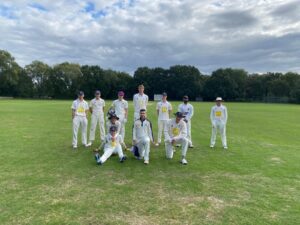