The Vine 1st XI, buoyant from their opening league win last week, entertained Lordswood on Saturday but could not repeat the dose and lost a cliffhanger in the last over.

The Vine lost their second toss out of two and again were asked to make first use on a pitch with a tinge of green. Unlike last week, the Vine’s dominant batting line up found it tricky against a determined visiting attack.Only Mike Barber (82) managed to get on top of the Lordswood attack. He was let down somewhat by his colleagues as most got in and got out in careless fashion leaving the Vine to defend an under-par 205.

Lordswood, missing some of their regular stars scraped home with 2 balls to spare thanks to their Captain and talisman Chris Piesley (69) and cameos from Ed Taylor (42), and Michael French (31).The Vine bowlers, tried hard in vain to get on top but the target always seemed within reach for the visitors and so it proved.Chris Vernon continued his impressive start to life as a Vine Allrounder taking 3-36 and James Carslaw was in good form returning 2-30.

The Vine batting ultimately cost them victory on Saturday and the season rolls on this week with an away match against reigning Premier Division Champions Blackheath. 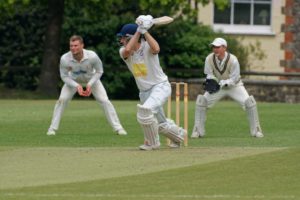 A great start to the 2019 season for the Vine 2nd XI, as they defeated Lordswood 2’s by 3pm on Saturday afternoon.
Having lost the toss and put in the field, the bowlers made the most of a bit of overcast swing and spot of green on the Lordswood pitch and dominated the Lordswood batsmen. With wickets for all the bowlers, Al Christie (1/26) and Piers Robinson (2/10) opened up, before Sevenoaks debutant Matt Dalton came on and set about destroying their middle order with 4/31 – which included 3 wickets in one over, but missing out on a hat trick on his league debut. The Lordswood innings was then put to bed by two other Vine debutants, Freddie Young (2/15) and Joe Banks (1/0), bowling them out for a total of 86.
With a fast turnaround between innings, because tea wasn’t ready yet, much to the dismay of Captain Anderson, the Vine batsmen wanted to get the runs on the board and head home. After losing Tom Harvey for 2, Mike Thompson lead the way with an unbeaten 53 not out. With cameos from Chad Quinney, who fell LBW for 16 and Ben Anderson (12 n.o.) the game was wrapped up just in time to enjoy the post-match tea.

An excellent start to the season for the 2nd XI, who welcome Premier League new boys Blackheath to the Vine next Saturday.

Sevenoaks Vine 3s good start to the season continued with a 54 run win against Rainham. Having won the toss and elected to bat, Mike Martin (37) and Nigel Taylor (23) got the team off to a good start – Nigel Taylor was first out miscuing a drive into the covers and was quickly followed by Adrian Spurling (2) who inexplicably missed a full toss. Matt Wilson (29) then had a good partnership with Mike Martin before Martin mistimed a pull shot. James Page (23) hit some lusty blows before both Wilson and Page were out to good catches in quick succession. Skipper Hugo Tudor (31no) joined Steve Bezuidenhout (39no) and the pair added 62 off 8 overs to set Rainham a challenging target of 206.

The Vine defence started well, with Will Ansell (4-16) taking a wicket in his first over and he in combination with Ryan Gavin (1-32) reduced Rainham to 48-4 after 12 overs.The spin twins of Mike Martin (2-30) and Hugo Tudor (2-22) then strangled the life out of the rest of the Rainham innings before Will Ansell returned to take the last wicket with the first ball of the last over. Nigel Taylor excelled in the field with two catches and a run out and his son Charles Taylor bowled a promising 4 over spell in his first appearance. The 3rdXI have a week off this week before returning to action on the 1stJune against Kings Hill.

A twenty minute rain shower and a green pitch didn’t deter a confident Vine from batting first in Sunday morning’s fixture against Linton Park.  The openers worked hard but full-length bowling with the new ball, combined with a supportive field made scoring difficult. The ball skidded a bit and some of our batters trusted the bounce a bit too much.  Soon the Vine had collapsed to 39-5 after 11 overs. Good patient resistance from Will Ansell (on one leg due to injury) and James Thomas almost doubled the score before the next wicket fell.  This was followed by some determined batting from the lower order who added more runs and used the full 25 overs. The Vine concluded their innings on 90-8.

Defending 90, Will Gough-Cooper bowled full and straight and tied down the openers.  He was well supported from James Thomas who got the only wicket of the Linton Park innings, trapping the batsman LBW. However, the Vine simply did not have enough runs on the board, and Linton Park went on to win within 14 overs.