Saturday saw a famous victory for the Vine as they sealed a remarkable victory in the final over.

After last week’s abandonment against Tunbridge Wells, the Vine looked to continue where they had left off the week before having beaten Beckenham. They were welcomed to a very green pitch on an overcast day and were sent in to bat. As predicted, the conditions favoured the bowling side with the ball nipping off the seam leading to the early demise of John Bowden (7) and Chris Vernon (12), both being bowled by Xaxier Darroch (2-21). Mike Barber (15) and Luke Schlemmer (32) then steadied the ship before Arafat Bhuiyan stormed through the Vine middle order picking up 5-25 from his 10 overs. Miles Richardson came to the crease and gave the side a revival scoring 49* with the rest of the tail chipping in to lead the Vine to a total of 152/9 from their 50 overs.

Encouraged by what they had seen in the first innings, the Vine bowlers set their sights on Bickley’s openers. The Vine openers were economical, with James Carslaw going for just 7 runs from 5 overs. The opening stand hit 50/0 but was soon broken as Alex Moen (17) chipped a Karl Pearson delivery to Andrew Reid Dick at mid off who had to make a good catch low to his right. Spin came into the attack and had a rapid effect with Reid Dick finding Alex Durroch’s leading edge which was caught brilliantly by Adam Rouse diving to his right. Safween Imitiaz came and went for the home side, needlessly charging Reid Dick only to be stumped by Ben Price. Daniel Magin then arrived for Bickley and Joe Banks was thrown the ball in his debut for the 1st XI and he would take his first wicket, finding Magin’s outside edge to be caught by Barber at slip. All the while, Bickley’s other opener, Alex Fullarton (37) was still at the crease. Having been dropped and with a few other lucky escapes, he was finally dismissed of the bowling of Schlemmer being caught by Bowden. Adeel Malik was caught at point by Pearson off Reid Dick’s bowling leaving him with excellent figures of 3-22 from 10 and left Bickley 109/6. Michael Ridley (20) and Warren Lee (29) built a partnership to give Bickley hope and all looked for a nail biting ending.

Banks bowled superbly in the penultimate with several dots to leave Bickley with 8 required from, the final over. Schlemmer took the ball and took a wicket with his first ball as Lee looked to slog sweep only to be spectacularly caught by Richardson at deep mid wicket. Now the game was in the balance. Ridley then scored a 2 leaving 6 to win from 4 deliveries. Ridley was bowled the next ball swiping across the line bringing Durroch to the crease. A dot followed leaving 6 to win off 3. He then looked to score through mid wicket, but an outstanding diving stop, pick up and throw by Reid Dick caused a mix up with Durroch refusing a second run leaving Ranjit Siingh stranded without facing a ball. This left number 11 Bhuiyan to face the final ball with 5 to win but could only spoon the ball in the air to be caught by Price, leaving Schlemmer with figure of 4-35 from 10, and jubilant celebrations from the Vine team.

The Vine look to make it three wins on the bounce away at Sandwich next week and will be heavily encouraged by a very hard fought victory.

The Vine 2nd XI hosted Holmesdale on Saturday in a dominant contest which saw the home side come out victorious by 3:30 in the afternoon.

Electing to bowl first following an uncontested toss, opening bowlers Piers Robinson and Tom Parsons looked to make early inroads into the Holmesdale batting line up. Both bowlers bowled extremely tight, and it would be Parsons (1-25) who would make the breakthrough, taking captain Dave Roffey’s middle stump in the fourth over. Robinson (3-18) would follow up with a wicket of his own a few overs later thanks to a smart catch from wicket keeper Chad Quinney, and another two in his next two overs. At 33-4 after 15 overs, Holmesdale were in deep trouble.

It would not get any easier for Holmesdale as Matt Dalton replaced Robinson from the Pavilion end, and proceeded to continue from where the opening bowler had left off. In his second over, Dalton produced a double wicket maiden, bowling Fred Shaw for 10 and finding the edge of Alex McCann’s bat for 0. Off spinner Mike Thompson then found the edge of opener Joel Kovoor’s bat for 22, with thanks to an athletic catch from Greg Adams at first slip. With the score 58-7, Nathan Fawcitt and Dave Hudson frustrated the Vine; both batsman played sensibly and to their credit, managed to form a substantial partnership of 38. Hudson would however fall for a well-made 21 off the bowling of Fred Young, allowing Mike Thompson (3-27) to mop up the tail in two successive balls in his next over. Holmesdale were bowled out for a meagre 96, and became the second team this year to be bowled out for less than 100 by the Vine.

With tea not ready, Vine openers Greg Adams and Oli Durell emerged from the Pavilion looking to knock off the small total unscathed. Bowlers Pete Grove and Dave Hudson however bowled well in their opening few overs, with Hudson picking up the wicket of Durell for 4. This would be Holmesdale’s only wicket, as the next ten overs consisted of an onslaught from Greg Adams (33 not out) and Evert Bekker (48 not out). The pair played some sumptuous drives through the offside and powerful pull shots, against both the seam and spin of Holmesdale. Bekker in particular found the boundary at will. The Vine would complete their chase in the fifteenth over, with Bekker smashing the ball into the trees for six to complete a nine wicket victory for the Vine.

The Vine can take great confidence out of this comprehensive victory over their noisy neighbours and still sit top of the Kent Premier League. Next week will see the visit of Sandwich, who only sit two points behind in third place, in what might prove a crucial game for the rest of the season. 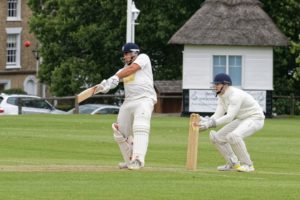 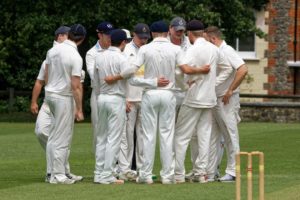 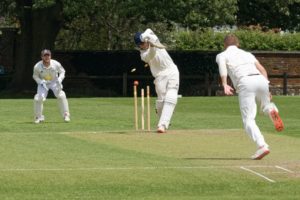 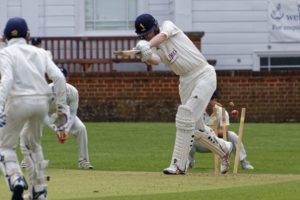 Having lost the toss and been put into bat, James White and Will Peters got the team off to a good start on a wicket that kept very low throughout. After unfurling some excellent drives, White miscued a pull and was out for 19. Peters was then joined by Adrian Spurling and this pair rattled along before Spurling was out for a well made 52 with the score up to 142-2 after 25 overs. This quickly became 146-4 with the loss of Byron Cooper-Fogarty and Zach MacIntosh Pearce failing to trouble the scorers. Matt Wilson then joined Peters and continued his excellent run of form, ensuring the score would get well over 200. Will Peters reached an excellently made 100 full of powerful drives before departing with 4 overs left followed shortly after by Wilson and it was left to Steve Bezuidenhout and Carl Nightingale to hit the Vine up to 220-6.

The Lenham reply got off to a very slow start due to excellent bowling by Johnny Coleman and Carl Nightingale. Whilst Coleman was unlucky not to get any wickets, Nightingale picked up a couple but Lenham found themselves at 60-2 after 20 overs and effectively out of the game. Mike Martin replacing Coleman broke the third wicket partnership with a cleverly flighted delivery and picked up a further wicket to end up with 2-23. However, it was Byron Cooper- Fogarty who was the star of the shpw. Cooper-Fogarty came on at the other end and ripped through the rest of the Lenham batting line up, clean bowling six batsmen to end up with the astonishing figures of 6-4 as Lenham fell away to 81 all out.

The Vine remain unbeaten and top of the league, and can look forward to the long journey to second place Minster next week for a crucial top of the table clash.

The Development Team’s first fixture against Holmesdale was cancelled on Sunday due to heavy rain during the morning, and will now face Bexley away next weekend in their first fixture of the season.