Old Oaks causing havoc in Porto! Match Reports from our weekend away

On Friday 18th July 2018, Charlie Compton’s Old Oaks team left these shores for Porto, with an unbeaten record neatly tucked away in the skipper’s blazer pocket. The weekend schedule would see Compton’s charges compete in two declaration games (each with an 11am start time) at the excellent Oporto Cricket & Lawn Tennis Club. More cricket than many of the Old Oaks would expect to accumulate in a season.

It’s funny how the leader of a team can dictate the mood of an entire group.
A charming socialite, who ran his team with grace both on and off the pitch, drenching a touring side with hospitality at every given opportunity, might find that his team play the game in a wonderful spirit, fighting hard but fair and showing class throughout.
Compton’s Old Oaks ate well, showed limited commitment on the field and were generally apathetic, but affable.
Saturday, Match #1
Compton won the toss, and with the Oporto pitch looking fantastic in the blazing sun, the only decision was to bat.
Having impressed in the nets, Juddy opened up with Old Oaks debutant, Guy. But Junaid – the Pakistani quick, with whom we were to become very familiar over the next 48 hours – had a bit too much pace for Juddy who lost his wicket cheaply. Guy looked like he didn’t fancy it either, running himself out shortly afterwards.
Junaid tired after 4 or 5 overs, and the recovery was brought about by a stand between Byron and Sykes. Having got himself in, Sykesy gifted his wicket for 20, and Dan Tiley joined Byron at the crease. These two really took control, and accumulated at a decent rate until Byron skied one on 47. The skipper made a brief appearance before falling cheaply, which conveniently freed him up to open a bottle of red and left the visitors 120-odd for 4 at lunch.
It was lunch, which arrived by tractor, that was the highlight of the day. A magnificent chicken curry was the catalyst for debate – red or white? And desserts and cheese were perfectly accompanied with a couple of bottles of lightly chilled Graham’s 10 year-old Tawny. We were living the dream. Particularly Simon Pencils Constantine who showed very little intention of contributing the other side of the ropes.
Tiley had the measure of the Porto attack after lunch, and smashed the ball to all parts, scoring a very entertaining 86 before being caught by a little Portuguese chap. Lowndes and Whizz ensured the innings finished finished on a high with about 30 each, and an hour before tea the tourists had posted a very respectable 270-7 declared.
Eventually, we had to go out and bowl. The skipper cajoled 7 or 8 overs from a reluctant Byron, who gave the hosts all sorts of headaches and ended up with 5 wickets for his troubles. Gavin Scott also bowled well, as did debutant Guy. Given that we had no scorebook, it is enough to say that some people did very well, and others not so, and the Old Oaks won by 69 runs. And lunch really was magnificent.
Sunday, Match #2
Another successful toss saw Old Oaks opting to bat first once more, despite the cloud cover. What with the skipper being such a card, he thought it right to construct a batting order based on the amount of sleep accrued by his charges the night before. So Sykes and Scott were given the opening duties having retired to bed at 6am. Remember these games start at 11am. Constantine was also shoved up the order on the basis that he was spotted in his pants, sleepwalking around the clubhouse at 4:30am.
We can only assume that our friend Junaid had his recommended 8 hours. Despite bowling around 20 overs the day before, he was looking the picture of health and relishing the conditions.
Sykes took the first ball. In the ribs. The next one was on the inside thigh. The one after on the arm. In fact during the first 6 overs, the night owls accumulated more bruises than runs. But they battled on and it wasn’t until Sykes fell for 44 that the hosts made their breakthrough. Byron fell cheaply, bringing Constantine to the crease.
There was a nervous tension in the air as Constantine meandered out to bat, as a refreshed Junaid was warming up for his second spell. A genuine concern for our designated scorer’s safety. But Constantine wasn’t here to read any script. A quick single to third slip meant he would take on the Pakistani paceman the over before lunch. To his enormous credit, he saw the over out. But he did comment over lunch that he’d prefer to have had the pads off for the cheese and port.
Despite losing Constantine shortly after lunch, the tourists’ innings continued to develop well. Scott continued to play the anchor role perfectly until he was dislodged for 50. At the other end Tiley made a quick 30-odd, including a straight six off Junaid, after which the paceman found another couple of yards of pace and was reluctant to deliver the ball anywhere other than around Tiley’s earholes. Our Cap Mule Hugo also contributed a cavalier 30-odd, and the skipper swished a brilliant 40-odd at the end of the innings, enabling a fair declaration of about 220-9.
Again, we had no scorebook and memories are tainted from lack of sleep and powerful aching across all body parts by this time. But we bowled well initially, Tiley taking out their opener with a mesmerising slower ball and Guy taking a few wickets with his slow straight stuff.
Byron – who was brought up on Saturday + Saturday cricket in Australia – was showing the signs of someone not used to playing consecutive days. He tired quickly from his opening spell, dropped by far the easiest catch ever witnessed and failed to take the final wicket of the weekend in a three-over spell against the little Portuguese chap, who first picked up a cricket bat September 2017.
So the match was drawn, but the Old Oaks remain unbeaten overseas. And lunch was magnificent.
Thanks must go to Oporto Cricket & Lawn Tennis Club for excellent hospitality over a memorable weekend. And of course, an extra special thanks must go to our hardy umpire, Tim Blakey Dickinson, who was there when we needed him most. 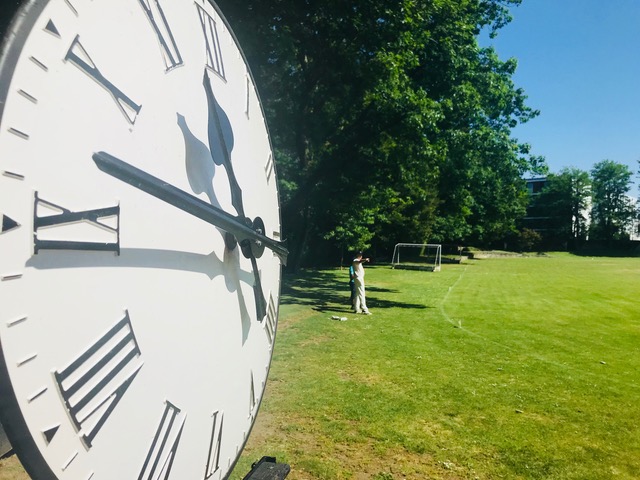 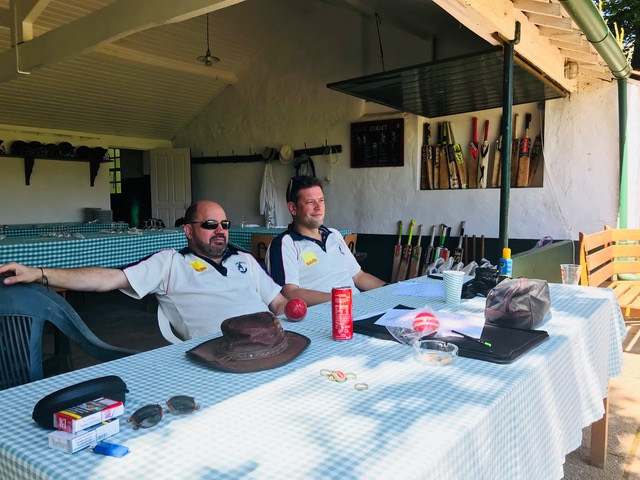 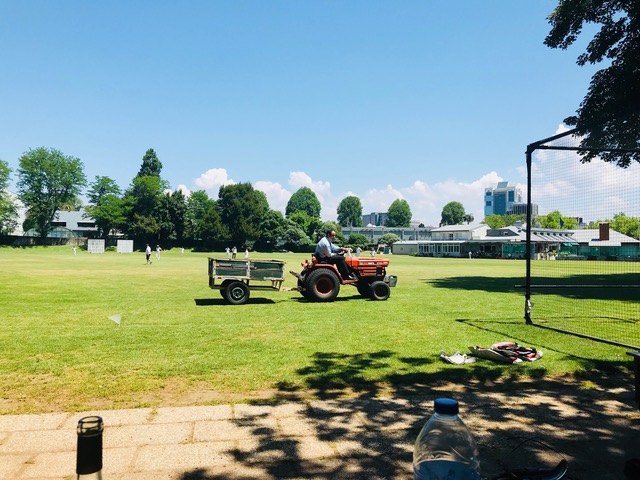 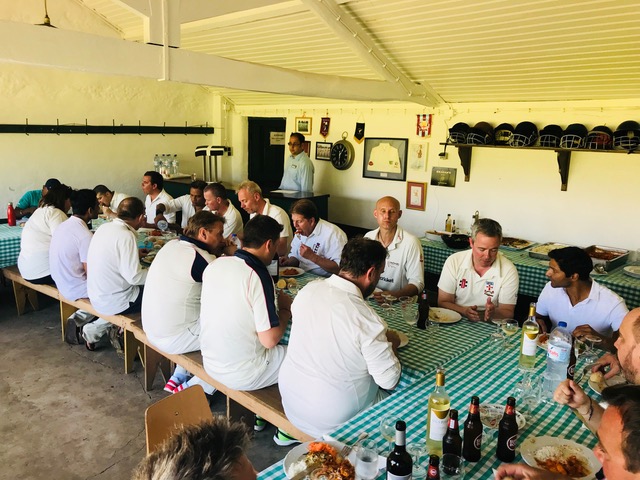 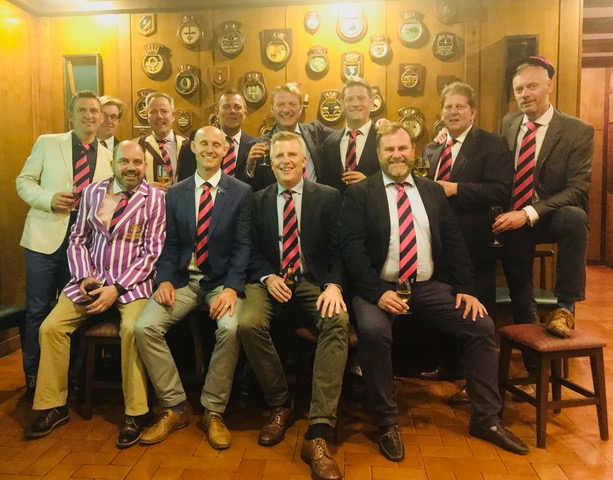