After the opening weekend’s dramatic final over victory against Bickley Park, Sevenoaks Vine 1st XI travelled to Blackheath, a ground of fond memories following last season’s final day survival. Oli Durell won the toss and selected to bat first. A decent start from openers Bowden and Bekker left the Vine well set at 53-2 with Schlemmer and Aitken at the crease. Unfortunately, only 15.4 overs had been bowled until play was suspended for rain, which would be the last of the action with the game abandoned with the Vine in a good position to post a total of over 200. Whilst it was frustrating not to complete the game, the First team return to action this Saturday at home to Lordswood.

Sevenoaks Vine 2’s hosted local rivals Holmesdale in the second league game of the season. After winning the toss, Vine put the visitors into bat with overcast skies and showers surrounding the ground. However, openers Bonner (55) and Melbourn combatted the new ball nicely until Thompson made three quick breakthroughs for the Vine finishing with 3-32 from his 10 overs. Holmesdale captain Bryant (48) along with Earl (32) batted sensibility with Reid-Dick bowling tight areas throughout the middle overs until Boudville took Earl’s outside edge finishing with respectable figures of 1-27 from 7 overs. Christie (2-43), White (2-41) and Robinson (2-34) cleaned up the lower order between them with Holmesdale finishing on 222 all out.

Vine openers Barber and Thompson set about chasing a respectable total, both playing their shots to reach a 50 partnership. Melbourn came onto bowl making the breakthrough taking Barber’s (33) outside edge and shortly after Thompson departing for 21. However, heavy rain stopped an evenly poised game with Quinney and Adams at the crease with the Vine at 70-2 where both sides collected 10 points a piece.

The Vine 2’s travel to newly promoted Lordswood next week still searching for their first win after a much improved performance this week.

We still require a full time umpire for the season- if this is of interest please contact Piers Robinson on piers.robinson@gmail.com.

On a dark, dank day the Vine 3rd XI welcomed Upchurch to Orchard Field. Both captains agreed to play in the drizzle before the toss and agreed that if it became heavy they would see sense and retire to the pavilion. Happy days! The Vine won the toss and elected to bat on what looked a great track. Indeed as the drizzle came down the ball came on nicely for the openers Peters and Martin 50 for no loss then Peters fell and in came Byron Cooper-Fogarty for his first outing. He quickly set about the bowling until cutting a short one to point for 11. In came McNicholas, promoted up the order to belay his campaign to bat higher in the order! And it was justified too as he hit 40 before losing his wicket attempting to set a total for Upchurch to chase abaly supported by Tudor. As the drizzle started to take effect the wicket became harder to bat on as Dennigton came on and bowled with great accuracy nipping one in and one out knocking back Martin’s off stump with a delivery he was glowing about taking 4 for 20 off his 10 overs.

The Vine 3s managed to post 140 and tea was taken. Cooper-Fogarty and Coleman opened the bowling and despite all things looking mustard the rain intervened and called a halt to proceedings with Upchurch 12 for 0 off 5 having one of the openers dropped off an absolute flyer at first slip, as it looked like it was going to be a really tight and exciting finish. Next week, we travel to Lordswood to complete the Vine’s block of fixtures. 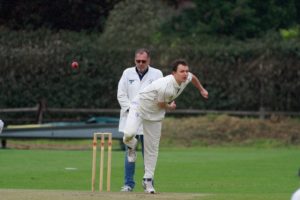 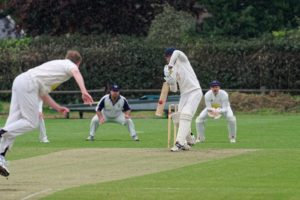 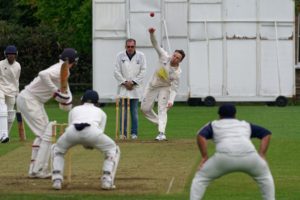 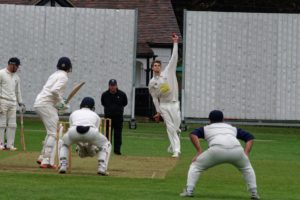