Looking to put last week’s home defeat against Lordswood behind them, the 1st XI travelled to last season’s runners-up Bexley. The Vine elected to bat first on a warm day and good looking wicket, hoping to emulate a similar start to last week. Captain Benn stuck early for Bexley taking the wicket of Bekker with Schlemmer soon to follow, edging one to Scotland International Matt Cross. Aitken and Barber likewise fell early on leaving the Vine at 57-4. Bowden had been playing fluently for his 45 before chipping one to long on off Adam Riley (3-29), who also took the dangerous wicket of Howick LBW. Durell and Richardson (45 not out) set about a recovery before Durell fell for 23 at 131-7. The tail failed to wag, leaving the Vine 158 all out as a result of some poor shot selection and good bowling.

Bexley came out with intent to knock off the low score quickly with Basey hitting 40 off 25 balls, before falling LBW to Parsons at 43-1. Parsons (2-34) would then later pick up the wicket of Laas LBW for 4. However, it would be a solid partnership between Bexley’s two international stars Matt Cross (48) and Calum MacLeod (50 not out) who would take Bexley within touching distance of victory before Cross fell to Schlemmer. Haley and MacLeod finished the job off for Bexley within 35.1 overs.

Another disappointing outing for the 1st XI despite some encouraging individual performances. Hoping for a change in form and fortune, the 1st XI will look to make amends in their crucial home fixture against Tenterden on the Vine this weekend.

By the brilliant Andy Clay.

A scorching summer’s day on the Vine was met with a run-fest as the 2nd XI faced a high flying Bexley. After winning the toss, Bexley decided to bat on a green twinged wicket that looked like it was only going to improve as the Saturday sun beat down. Christie charged down the hill first up bowling with pace and precision, taking the early wicket of Griggs in the first over and Wells in his second over. At 5-2, Bexley found themselves reeling. A tremendous battle then took place between Robinson and Christie who bowled with discipline, and batsmen Bell (43) and Abbas (29) who looked to survive the early onslaught. However, it would be Proctor who would make the crucial breakthrough taking Abbas’ off stump, closely followed by trapping Bell LBW.

As spinners Thompson and Cowdrey came into the attack, Bexley were well poised at 111-4 at the midway point. A partnership worth 159 between Barton (79) and Dalgliesh (121 not out) took control of the innings. After being 180-4 after 40 overs, the pair began to let loose, making use of the short boundary and punishing the Vine bowling. Some quite unbelievable hitting by Dalgliesh led Bexley to finish on 302-5.

Despite the formidable score to chase, the Vine set about their business with composure. Thompson in particular led the charge, adequately accompanied by Adams. The pair complemented each other well, punishing the bad ball as well as rotating the strike nicely. At 25 overs, the Vine were at 124-0, and looking in good shape to launch an attack.

Two quick wickets however thwarted progress with Thompson (68) chipping one back to Griggs and Houillion falling without scoring. Quinney joined Adams and played around captain Adams as he brought up his own 50. At 34 overs, the score would be 151-2, needing 10 an over to win the game.

Adams would now open up, playing strokes similar to Dalgliesh in the first innings by launching countless sixes into Seal Hollow Road. With 10 overs left needing 120, perhaps there was a glimmer of hope the Vine could replicate the end of innings hitting of Bexley. Despite bringing up his hundred, it was to be too little too late for the Vine as Adams fell in the 48th over for 128. Quinney also brought up his own half century (51 not out) whilst Cowdrey on debut showed what he had in his repertoire reverse sweeping Patel for six. The Vine finished 27 runs short finishing on 275-3.

A disappointing afternoon in which plenty can be learned, but full of great promise. This coming weekend, the 2nd XI will travel away to a strong Tenterden side.

It was a glorious day at Orchard Field where the Vine 3s welcomed Borstal 2s. We were treated to several fly pasts by the local Spitfires based at Biggin Hill, the roar of the Merlin engines getting the players necks craning skywards and dreaming what it would be like to reach for the sky.

The Vine won the toss and elected to bat. Peters and Martin posted another solid start of 47 before the first wicket went down. Borstal’s opening bowlers held their length and offered little width making driving the ball almost impossible on a very slow deck, unhelped by Martin’s pedestrian limping between the wickets didn’t help rotate the strike and singles failing to materialise into twos.

However other than Peters’ 50, all the Vine’s batsmen struggled with the lack of pace and bounce. A particular mention goes to colt Leo Bezuidenhout who scored a useful 27/ But similar to a summer air battle back in July 1940, the Vine’s innings was shot down in flames 143 all out and not using all their allocated overs. Borstal had done a fine job setting challenging fields saving runs and bowled tightly, with Tingley taking the best figures of 4 – 43.

However the Vine weren’t done …. Craig McNicholas and Jon Coleman opened the bowling and what a fine job they did, with Coleman swinging the ball in prodigiously and McNicholas banging away at a length. The Borstal openers looked all at sea, with chances flying wide of the cordon. It took a fine piece of work by colt Olly Chessell to get the ball rolling, running out one of the openers. Then the new ball was lost in the undergrowth and the replacement stopped hooping round so a double bowling change ensued with the spin duo of Tudor and Martin wheeling away. Wickets soon tumbled with Tudor (4-38) using the stiff breeze to great effect clean bowling 3 of his victims and nailing the other LBW, ably assisted by Martin who also took 4 – 35. In came Borstals last man who later admitted he was trembling like a jelly on a plate with still a job to do. But Tingley smashed Tudor for the only 6 of the game and it looked like the game was won, despite a difficult chance to be dropped at extra-cover. The Vine lost by 1 wicket when it looked like they had pulled the cat out of the bag a great game of cricket. 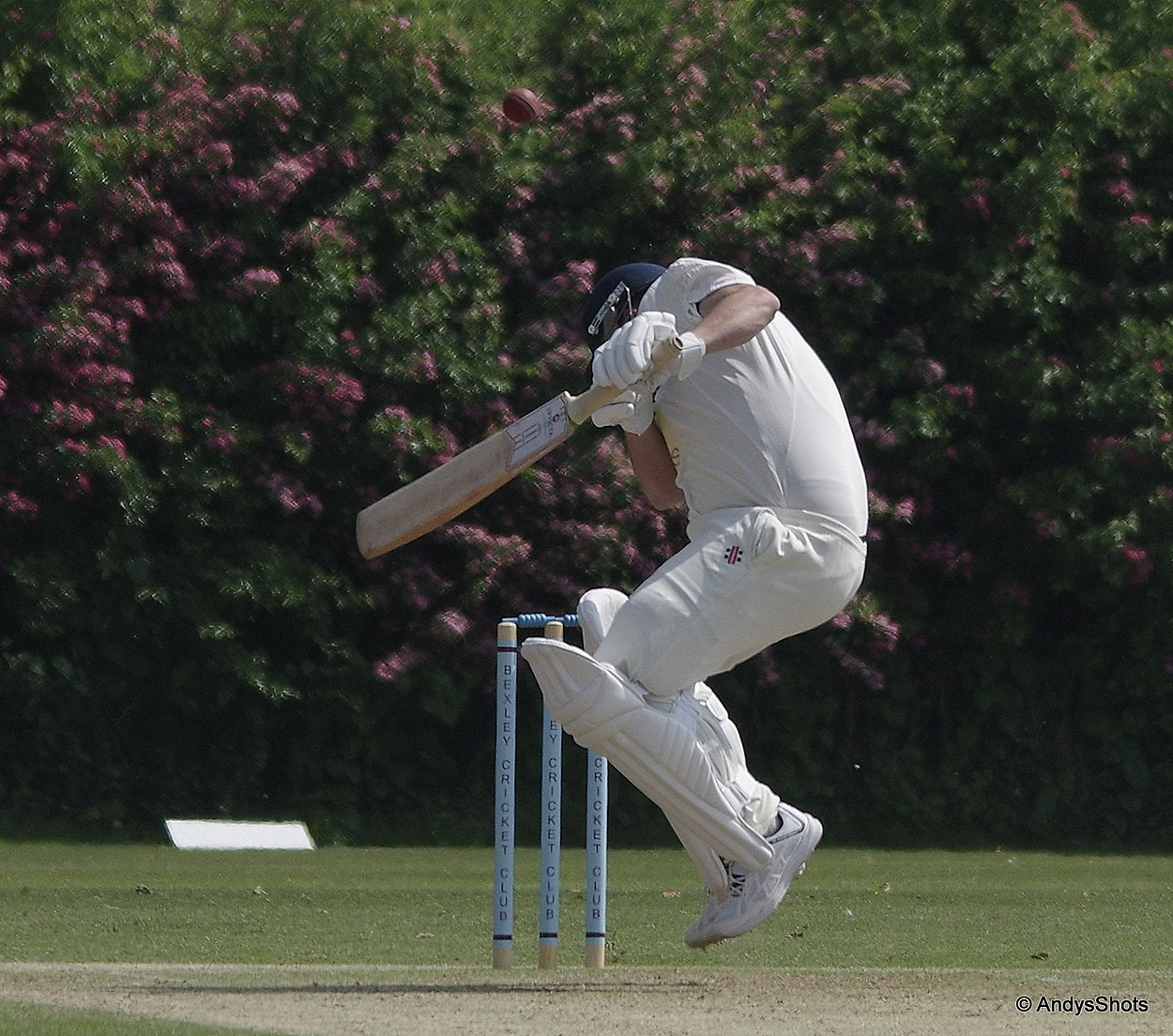 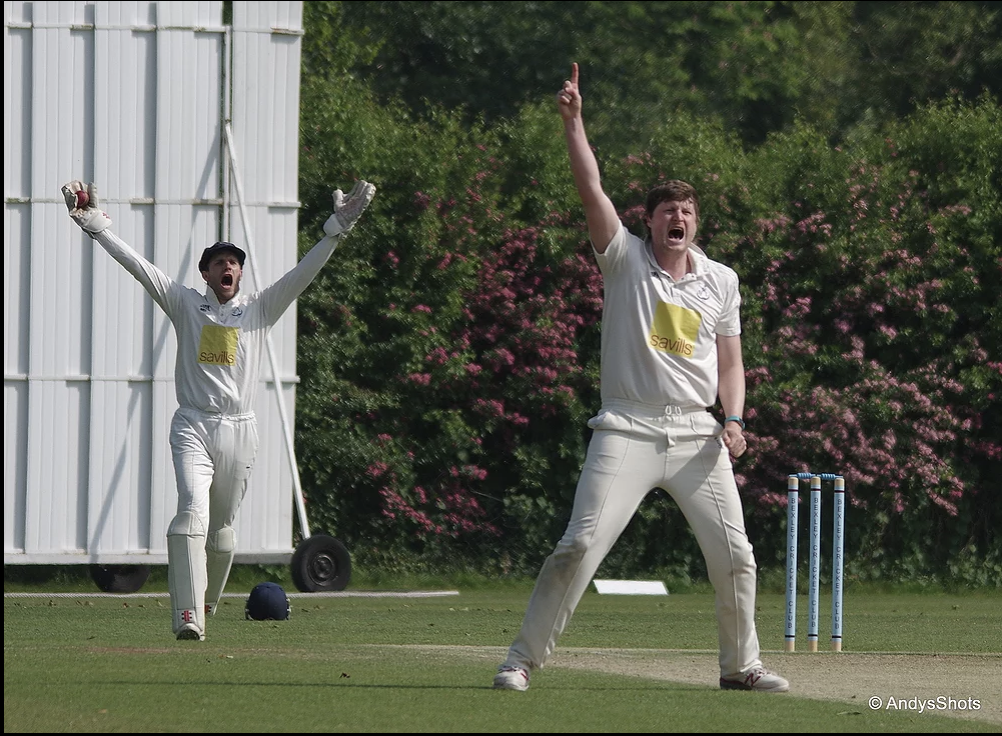