On a slow early season wicket and against the new ball pairing of Dan Magin and  Xavier Darroch the Vine top order found runs hard to come and early wickets fell regularly. With the scoreboard at 47 for 4, Miles Richardson joined Max Aitken and they put on a stand of 27 to steady the ship. When Aitken lost his wicket to spinner Adeel Malik, Richardson was joined by Cyrus White and they set about building a recovery with a stand of 112. White started cautiously whist Richardson began to open up, hitting some glorious boundaries and looked set for a well-deserved century when he ”missed a straight one” trying to accelerate the scoring and fell, bowled, for 82. White, growing in confidence was now playing with authority took up the charge hitting a big 6 straight back over the bowler’s head with 52 not out at the close of the innings, his maiden 1st XI half century with a creditable 207 for 7 posting a target for Bickley Park.

Bickley Parks’ inning closely mirrored that of the Vine, the top order falling cheaply, with two wickets for the pacey Miles Richardson and one each for Tom Parsons and the debutant Alex Christie. At 42 for 4 Dan Magin and Warren Lee, with a stand of 33, and then Lee and Michael Ridley putting on a further 93, the target set by the Vine was looking vulnerable. In a series of twists and turns the game was there for the winning by either side as a run out and a quick Yorker by Man of the Match Richardson, his 4th wicket in 10 overs, to remove the dangerous Lee setting up an exciting finish. Some terrific fielding by Max Aitken and Tom Coldman, resulting in two crucial runouts, saw Bickley Park all out in the last over just 2 runs short

Reflecting on a well-deserved win for the Vine and a welcome 18 points, Head Coach Rick Parsons  “was impressed by the team spirit and the application that had seen both the batting recovery and calmness in the field as Bickley closed in on the target”

Sevenoaks Vine travel to Blackheath next Saturday full of confidence and with key players in good form and improving availability will be hoping for a strong performance.

On a hot sunny afternoon, Sevenoaks Vine 2’s arrived at Hartley with plenty of new faces amongst the old for a difficult first match.

Put into the field first, Vine opening bowlers Boudville and Procter provided the Hartley batsman with some outstanding balls; however, they played the openers well with Green leading the way making 83, caught by Coleman. Fortunes changed when spinners Reid-Dick and Thompson were introduced, bowling with great accuracy with wickets falling at regular intervals. Thompson picking up 3-30. Procter (2-54) and Robinson (3-13) cleaned up the lower order with Hartley finishing on 235 all out .

The Vine chase didn’t start out as hoped losing Harvey early on, but Thompson and Quinney negated the Hartley openers well until Quinney was caught for 17. This was the beginning of a difficult period for the Vine losing wickets regularly and struggling to negate the Hartley seamers. It ended up being a first day of the season with the Vine being bowled out for 69.

We look to put this behind us quickly, turning our attention to derby day against our local rivals Holmesdale this Saturday.

Sevenoaks Vine 3s travelled to Rochester to play Sherwood 2s in the Kent Regional 2A Central league. Sherwood won the toss and elected to bat tight bowling from Gavin, Tudor and Martin kept the run rate down to 2 and a half runs an over from 30 overs and great death bowling from Colt Robin Docherty picking up 2 wickets and a run out of his own bowling kept Sherwood down to 146 for 8.

Harry Houillon and Mike Martin opened and posted 47 for the first wicket, Martin falling to the first lofted drive stalling in the air and caught at mid on, but it was to be Houillon’s day batting all the way through for 102* to add to his 2 stumpings and one catch behind as he returned to keeping after breaking his ankle… but there’s still room for improvement he did drop one all be it a hard chance. Thanks to Sherwood who were excellent hosts and we look forward to hosting Upchurch CC at Orchard Field this weekend. 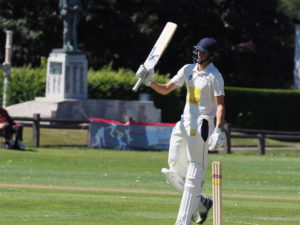 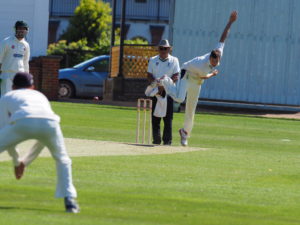