Sevenoaks Vine 2nd XI travelled to Hesketh Park to play defending Champions Dartford 2nd XI. Dartford won the toss and decided to bowl first on a green pitch, which proved to be a good decision as SVCC were 25-3 early on with in form Adams being removed LBW and Thompson and C White shortly after with the ball moving off the pitch. Harvey (49) and J White (70) stabilised the SVCC innings playing sensibly and running well with the big boundary. After drinks both Harvey and J White wickets fell quickly, leaving the lower order to contribute runs but the visitors ended up 185 all out.

With SVCC bowling well in recent weeks the SVCC bowlers got off to a great start with the pitch suiting opening bowlers Johnson and Carslaw. Between the two bowlers they took 5 wickets, Johnson (3) and Carslaw (2) making it difficult for struggling Dartford to gain a footing in the game. With drinks looming the Dartford batsman started to play some aggressive shots which began to build momentum for the home team. Brilliant bowling from Thompson broke the partnership and he finished his 10 over spell, only conceding 13 runs off it. A run out from Peters couldn’t have come at a better time for the Vine as it removed a batsman who scored 33 quickly and pushed the game back into SVCC’s favour and a bowling change saw Robinson (3) carry on his previous form with the ball taking 3 wickets, removing any hopes of Dartford getting over the line. A great win for the young team sees them finish the half way point in the season with 6 out of 9 wins. 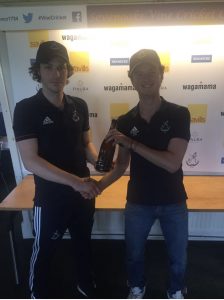