Brief match report from the season finale last week, when we hosted Rye golf club. I was turning out for rye.  After some careful negotiation between Sykesy and myself, Rye were put in to bat in a 12  a side 15 over bash. The golfers got off to a solid start with Hugo Morris and Cj Stephenson batting steadily, until Morris was dismissed for around 10, bringing Plaxtol player / Salix bats impresario Hugh Betts to the crease.  He charged down the pitch first ball but didn’t quite get enough it to clear Jerry Stanyard at mid wicket. Whether a Newbery would have cleared the ropes we what’ll never know. Wickets fell fairly regularly, including my brother nick who came all the way from Brussels to get bowled first ball by churchman, but the Lawson brothers rescued the golfers to an extent, getting us to 111, unlucky for some.

The old oaks opened with Howard and Brookey but some excellent bowling from Stuart Thresher, backed up at the other end by Pearce kept run scoring behind the curve. Pressure building, Brookey was dismissed first then Howard Collins was caught, bringing Bonze and Simon Constantine, back from injury, to the crease.  Peter thresher bowled incredibly economically, 2 overs for about 4 runs I think. Simon Constantine played some flamboyant shots and was unlucky not to connect with the ball. The old oaks were by now well behind the run rate, so far in fact that I was able to bring myself onto bowl. This is when the excitement really started and I probably need to go ball by ball for the report at this stage. My first one was blocked by Bonze, so I was surprised to hear some sledging coming from the batsman, I always thought he was the better behaved of the Billings brothers? Big mistake anyway, as next ball he was fooled by my slow one that doesn’t turn and holed out to a fielder near the boundary. They’d crossed so SiCo was on strike and he played all round a straight one that hit half way up middle. Sykesy strolled in to face the hat trick ball looking super confident in his pink and white cap. I bowled, it struck his back pad, huge appeal, and up goes Finger’s finger! Sykes didn’t look too happy but to be honest I have seen purple oval fruit in Tesco that are less plum than that!

So at this stage I am feeling pretty good, the old oaks need 60 off the last 5 and I have my first hat trick in about 20 years. I picked up the pace to Nigel Taylor, who prodded it back down the wicket, I turned and attempt a dive to save a certain single. I think my studs got caught in the turf and I landed on my ankle. There was a huge crack as my fibula snapped in two and I collapsed on the pitch. Then, to add insult to injury, or injury to injury, Jez Lawson, fielding at mid off, raced around to pick the ball and hurl it in to the stumps. It missed the stumps and struck me on the forehead! It’s a shame no one caught it on video as I reckon it would have gone around the world by now! 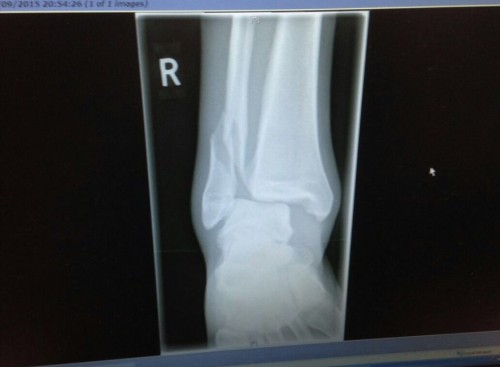 At this point Nick kindly escorted me to Pembury but I gather the players decided the conditions were clearly too dangerous for cricket and withdrew to the bar. Match drawn.

So I have been in hospital, Morphined up to the eyeballs ( which may explain any inaccuracies in the report) for the last 4 days but had a plate fitted today, and should be home tomorrow. An unforgettable end to a great season.

Compton of the match.   Nick for looking after me in hospital.

Both Comptons missed the end of season curry.