So, Orbilians cried off for the third, and possibly final, year in a row leaving us to have a highly competitive internal “Old Oaks”  (captained by unbeaten skipper Charlie Compton) vs “Very Old Oaks” (captained by eternally loosing Paul McMenemy), and astonishingly with no loading in favour of VOO at all.  Sadly VOO only has 10 men as Tim Dicko was apparently fleeing the country at an airport, no doubt as a result of Skip seeing him raiding the cash dispensers at Sainsbury’s earlier that morning.

VOO batted first on a hot and sunny evening, and whilst Skip tried to work out why the scoreboard was not working Gavin and Jerry set sail.  Sadly the circuit board looks to be burned out, pretty much the same as Gavin’s batting getting caught behind by Paul Seldon, who in turn was watched from the stands by his father Les, a former Vine and Bromley man.

This brought Gavan to the wicket and a sprightly partnership ensued, rolling back the years, as the runs clicked up despite some determined bowling. Charlie left an open invitation to drive, which was warmly accepted and VOO fell into his trap by knocking his 3 overs for 11, 9 and 15. Gavan became Stuart’s second victim and Will Minto’s first whilst Jerry signed off his 28* with a magnificent 6 into the posh houses.  BT and new boy Gary Atkins, curiously an opening partner for Les Seldon at Bromley all those years ago, carried on the march with some extremely crisp hitting; the 6 of the day coming from Gary, also off Charlie, and very nearly over the church, he went on to retire at 26*, some determined swishing from Frammy saw VOO reach 127 off 16.

Gibbo and Read, a stylish right-hander, opened for OO and manoeuvred the ball crisply around, so crisply that Skip wore one:- 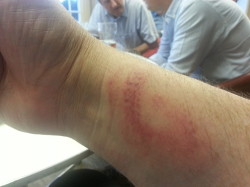 This was probably the match winning stop as it saved 3 runs and ensured the Skip rested his arm in the bar trying out one of the new instant ice packs, just as he was about to bowl up the hill.

Gibbo became Gary Atkins’ fist victim for the Vine (bowled), before Read became his second by virtue of a running catch off Jerry Stanyard.  Yes, you read that right, VOO getting a running catch – previously a contradiction. Meanwhile Stuart Seldon was stroking the ball all round the park and retired on exactly 25*, after which the batting was strangled by some tight bowling from BT, Smiffy and Gary Atkins, again (with a second victim); there was a catch and a stumping for Gavin Tovey in the battle of the keepers, whch Stuart probably edged.  OOs ended up 117 – 5 off their 16, proving beyond all reasonable doubt that age and cunning reign supreme, even when heavily outnumbered!

Man of the match on debut, Gary Atkins – we hope to see much more of this sprightly 58* year old, who hadn’t played for 9 years and had a dodgy arm, and back…..

The evening was rounded off with an exceptional curry as we watched the large round ball game on the box.

Charlie is keen to say that OOs won whatever but, of course, we know the truth – and with it goes his winning run.

I know you are all desperately pining for a health update on Skip’s forearm and so here it is on Sunday:- 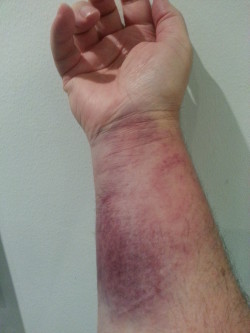 and then again today, Tuesday, some 4 days after:- 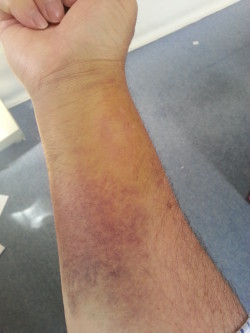 Yes, it is a sort of yellow and purple now.

One thought on “vs Very Old Oaks”