Match Report: Vine U13 vs Bidborough 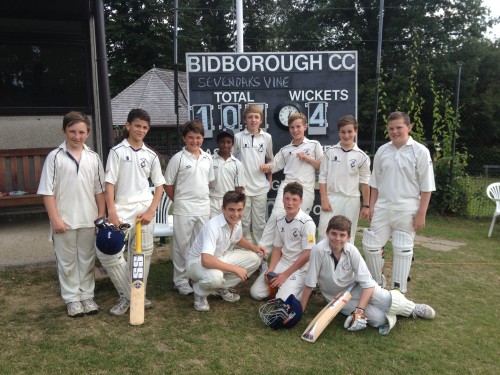 The last match of the regular season was away to Bidborough. It was a needle match as the victor would move to second on the log. Captain Sam Brown won the toss and elected to bowl on a hot day under a blue sky.

Jones and Brown opened – protecting the short boundary and focusing on making the batsmen play straight. Jones (left arm over) was pushing the ball across the batsmen and then straightened one onto middle stump and trapped his man LBW. Jones’s next ball was a corker and sent the incoming batsmen back for a golden duck. Jones was instrumental in the next wicket with a direct hit to run out the other opener.

Bidborough were 17 for 3. Enter M Lindley who play a measured innings to retire on 55 not out with a four and then a fine six over the bowler’s head. S Chitty bowled straight and took a return catch and Bidborough were 106 in 22 overs.

The tactics of protecting the short boundary and bowling straight had the desired effect.

Vine opened with Jones and Wright, who for the first time didn’t manage to get to their target of 25 of 5 – both were out cheaply. S Meakin came in at #3 as a pinch hitter with a license to plunder anything off the stumps. He then faced 6 balls from M Lindley all on middle stump and defended well however C Bryant was starting to pick of f the bowling from the other side. From then on it was Bryant’s time in the sun  – with 9 fours to reach 50 retired not out (his 3rd in a row). He was supported by S Brown and S Chitty and then M Oster came in to hit the winning runs off his first ball.

Once again Man of the match was C Bryant for a sparkling 51 not out.