Vine travelled to Cowdrey at the Swanmead Sports grounds in Tonbridge for their U13 game on 7 July 2013. Although it was an early start at 9am, the sun was already baking the pitch and blue skies were the order of the day.

Cowdrey captain (and Kent player) Toby Seal won the toss and elected to field. H Jones and C Wright opened and set about the bowling aware that they needed to keep the scoreboard ticking over with lots of batting to come. Jones drove straight to Seal and was quickly out, bringing our ‘pitch hitter’ S Meakin to the crease with orders to dispatch any ball not on middle stump. Meakin hit the first ball over the bowler’s head for 4. He was continuing in this vein until he got a full toss on the boot was adjudged LBW. Enter C Bryant for the ‘knock of the season’ so far. With Wright playing a supporting role, Bryant set about hitting the ball to all corners of the field. With Wright out for 12, B Kibblewhite took over the supporting role. Bryant retired on 50 with 9 fours. Kibblewhite (13) and M Oster (12) pushed on until Oster was out, caught, and Brown faced the last few balls for 6 runs.

But would this be enough with a Kent player in their team?

Cowdrey opened with Seal and Myles – and Seal hit the second ball high into the direction of mid-off and straight into the hands of S Chitty. A great catch and a potential match winner.  Although the Cowdrey batsmen defended well, their run rate was lacking and they were 48 after 11 overs, needing a 100 runs of the next 11 overs. S Brown was the pick of the Vine bowlers with only 9 runs off 4 overs. S Chitty took a wicket, R Gavin was pitching the ball up and Jones and Bryant made it difficult to score runs. Myles also retired with 51 not out.

Although the total always looked out of reach after the half way point, the Cowdrey batsmen still made a game of it and finished on 128 for 2.

Once again man of the match was an easy choice – C Bryant. 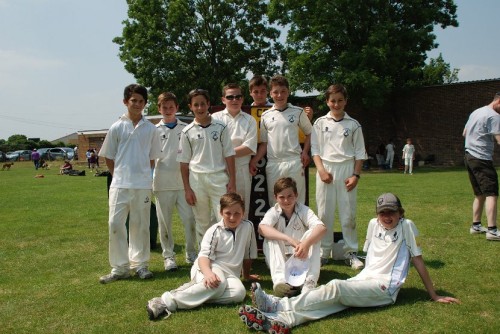