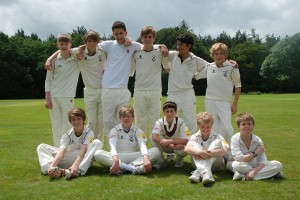 The Vine U13 team had a great 2012 season in the Kent Border League U13 Div 1, winning the league by 4 points from a close finishing Cowdrey team.

The wet weather prevented any pre-season practises and washed out the first game, however the squad practised as a team whenever possible (we even had an indoor nets session).

With 24 boys in the squad there was always going to be a challenge to give everyone enough cricket, but everyone got a game and either batted or bowled.

In truth we had a very strong squad and this showed in the results.

Played 9, Won 7, Lost 2,
with our last game against Holmesdale being abandoned.
There were a number of individual performances that merit mention:

Christian Bryant and Noah Zuberi delivered good all round performances with both bat and ball.

In the batting department Captain James Bevan Thomas lead the way and saw off the opening bowlers with his fellow openers Robert Andrews and Sam Brown, allowing Charlie Oster and Ben Devaney to come in at 3 / 4 and plunder runs at will. An opposition coach learnt not to park his car in cow corner at the Vine with Devaney on strike. The game had to stop for a minute as the boys all rushed to see the damage.

Our opening bowlers of Oster and Devaney terrified the opposition. Andrew Reid-Dick mesmerised batsmen with his tantalising left arm spin (he tore Cowdrey apart with 5/5) and took 7 catches throughout the season. Oli Seth and Frankie Storey bowled with pace and accuracy. I was particularly proud of the boys that weren’t regular bowlers but stepped up to the crease and ended up taking wickets by just bowling straight – James Todd, Ben Foss and Felix Enslin all got wickets when tossed the ball. Connor Wright, as wickie, had 3 stumpings and averaged only 4 byes per game (even with Devaney bowling FAST)

Most important is that I think the boys had fun and learnt a bit more about cricket. They behaved well, were gentlemen on and off the field and supported each other as team mates should. 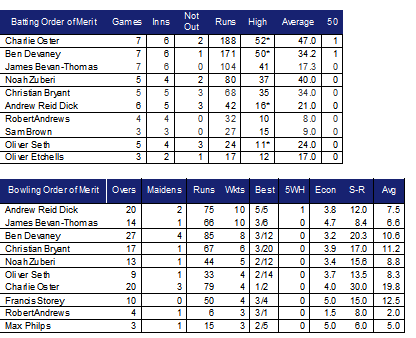