Match report: Vine U15 vs Cowdrey 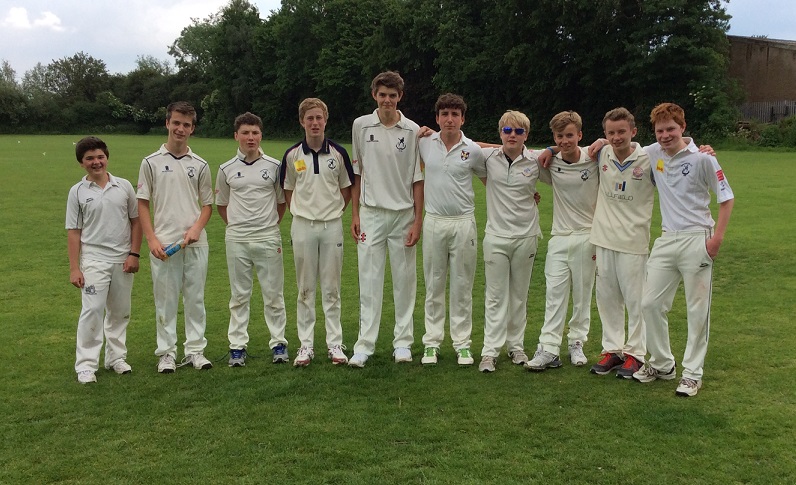 On a lovely sunny day, Vine U15 travelled to Cowdrey at their Swanmead pitch. Vine lost the toss and were put in to bat.

Captain James Bevan-Thomas opened with Tom Pollington. Cowdrey opening bowler Toby Seal was bowling at a healthy pace and had Pollington caught at silly mid on fending off a back of a length ball. Bevan-Thomas followed shortly thereafter after, hitting a short ball meekly down square-leg’s throat.

Christian Bryant and James Carslaw kept the score board ticking over until Carslaw was caught in cow’s corner to a great high catch. Bryant was next to go also caught at square leg.

Tom James came in and got off to a brisk start but perished to a straight ball outside off, nicking it to the keeper.

Sam Marshall steadied the ship with 36 off 37 including six 4’s, helped by Connor Wright and James Phillips propping up the other end. Wright was run out to a direct hit attempting a second run for the cause and Marshall shortly thereafter driving straight to cover.

Felix Avery then came in for a big swing on the last ball and was bowled middle stump.

Vine scored 109-8 in 22 overs. Exactly a hundred short from their last game.
Drinks were taken and Vine took to the field, Christian Bryant filled in at keeper for Connor Wright who had injured his back diving for the crease.

Pollington opened the bowling moving the ball away from the batsman and drawing the nick on his 5th delivery sending the opening batsman back to the pavilion.

James Carslaw took the other end pushing the ball across the batsman with pace and bounce.

Andrew Reid-Dick came on as first change for Pollington inducing a dropped catch in at deep cover before taking 2 wickets in 2 balls and having his hatrick ball dropped at first slip.

Tom James took over from Carslaw, bowling line and length keeping up the pressure on the batsman. James induced a pop fly from the batsman and was easily caught at extra cover by Pollington.

Andrew Reid-Dick went past the outside edge and got his man stumped by stand-in keeper Bryant. Cowdrey were 21-5.

Hugh Jones came on and was initially dispatched to the boundary before coming back with 2 good wickets. One of those being a good high catch by James Phillips – a lesson in calling for the ball. James then had an over before being replaced by Sam Marshall.

Marshall cleaned up the tail, bowling a maiden in his first over and 2 wickets in his last.

Match over and Cowdrey were all out for 95. Vine won by 14 runs.

Man of the match was Sam Marshall for a quick fire 35 runs and closing out the Cowdrey innings.

Full score card (Thanks to Jeremy Marshall for scoring)

SVCC U15 Vs Cowdrey