The Vine Under 9’s took 10 players to play to the 8-a-Side T.Wells Cricket Festival on Saturday 8th September 2012 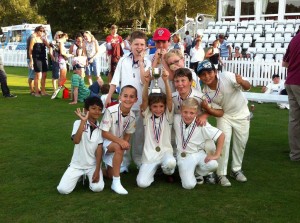 We won 4 of our Group games and narrowly lost by 3 runs to T.Wells 1 in a tight encounter. But with T.Wells 1 having lost an earlier match we both topped the Group on 12 points, with the Vine winning the Group based on runs scored. T.Wells 1 were not happy! 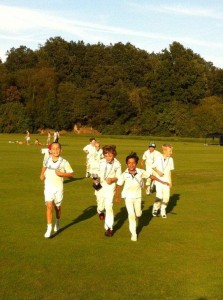 The Final was against local neighbours Holmesdale, who had two Vine players and three Otford CC players playing in their ranks. We got off to the worst possible start losing 5 runs to a Run Out first ball. Our first two pairs batted sensibly against some good bowling and took the score to 207 with two pairs remaining. With some big hitting and near suicidal running, we posted a score of 235 which I was very pleased with as we were a better bowling than batting unit.

With tight bowling and excellent fielding and a terrific catch by Seb Watson on the boundary Holmesdale needed 16 from the last 12 balls, against our two best bowlers. A wicket in the penultimate over left Holmesdale requiring 12 off the last, but with further accurate bowling backed up by good fielding they needed 10 off two balls, a further dot ball and wicket off the last ball left the Vine winners by 15 runs.

Pandemonium ensued, followed by Medals, Trophy ceremony and a lap of honour by the boys. All played in excellent spirit in a real team effort, all of them raised their games, played well under pressure, took their catches and fielded like demons with great support from parents and siblings.

T. Wells put on a great day, well run and the weather was terrific.